Failures of the criminal justice system 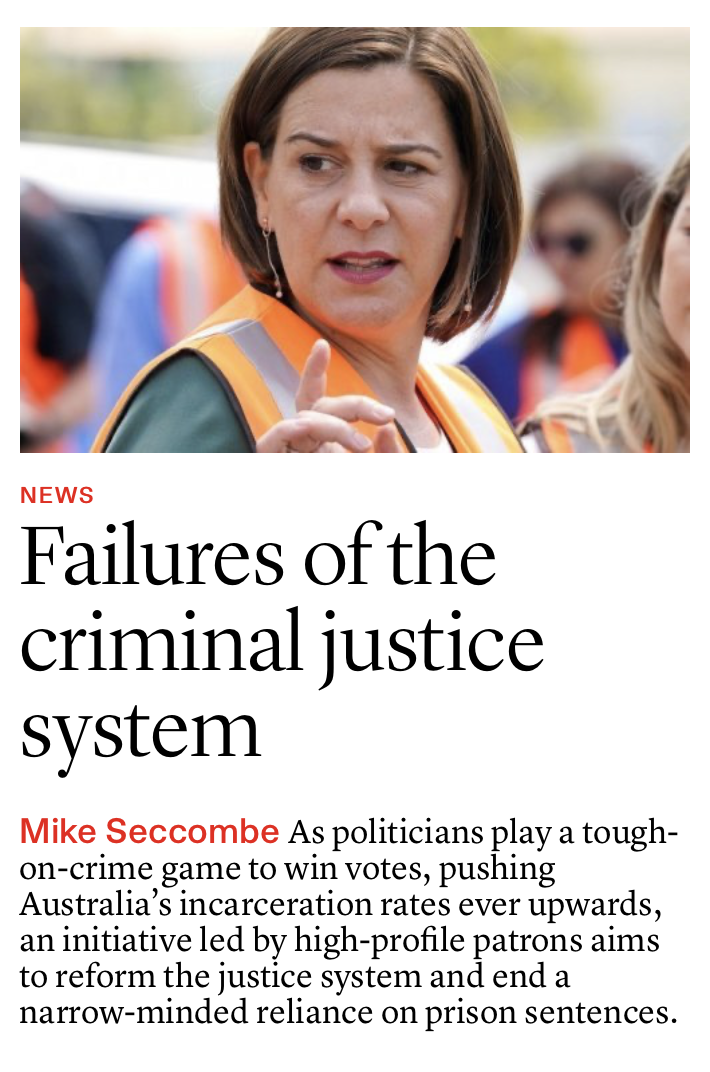 If elected next Saturday, she promised, her government would impose curfews on all children in Cairns and Townsville. Anyone under age 14 out past 8pm, and anyone under 18 out past 10pm, unaccompanied and “without good reason”, could be detained by police. And their parents would be fined $250.

And while the details – such as where these children would be held and for how long – were unclear, her motivation was crystal.

Behind in the polls and just days out from an election likely to turn on a few seats in the far north, particularly in Townsville, Frecklington is desperate for an issue that might move undecided voters.

“So she reached into the bottom drawer and pulled out a good old-fashioned law-and-order campaign,” says Michael Cope, president of the Queensland Council for Civil Liberties.

And a particularly bankrupt one at that, Cope says, for it would put everyone under 18 effectively “under house arrest … locking up anybody under a certain age, whether they have committed an offence or not”.

“It’s just rampantly open to abuse,” he says. “It will, no doubt, be used by the police predominantly against Indigenous people and other disadvantaged people.”

The threat of fines levied against parents is of particular concern, given unpaid fines are a major reason the most disadvantaged people end up in jail.

Cope does not dispute there are crime issues in Townsville, but says it is not nearly so serious as has been portrayed in the media. The Murdoch-owned Townsville Bulletin, along with tabloid television, encouraged by right-wing LNP members, have run a long campaign of wild exaggeration with echoes of the “African crime gangs” coverage seen in Melbourne ahead of the most recent Victorian state election.

Cope says both sides of politics have resorted to “pushing the law-and-order button” during this campaign.

And while simplistic punitive policies, such as Frecklington’s, don’t actually solve the complex problem of criminal behaviour, they do work to the commercial advantage of populist right-wing media and the electoral advantage of right-wing politicians. They work to justify prejudice. And they work to ensure an ever-growing flow of people into prison.

They work so well that Australia now has one of the highest incarceration rates of all developed nations.

“Nationwide, the recidivism rate is about 55 per cent. That means more than half will be back in corrective services control, either inside a jail or in a community corrections program within two years. It’s a revolving door.”

Since 2000, the number of Australians in jail has doubled, dramatically outpacing population growth. We now rank third among comparable countries, well ahead of all of western Europe, Britain and Canada, just behind New Zealand and way behind the United States in imprisonment rates, says Nicholas Cowdery AO, QC.

Cowdery, a former director of Public Prosecutions in New South Wales, is now a board member of the newly formed Justice Reform Initiative – whose patrons include three former High Court justices and two former governors-general, along with scores of other former judges, lawyers, police chiefs, Indigenous leaders and former politicians from all sides.

The statistics they’ve compiled are damning: more than a third of prisoners are unsentenced – that is untried, on remand, refused bail – and many of them will not be convicted or sentenced. That’s an increase of 122 per cent during the eight years to 2019. Some 13 per cent remain in custody for a year or more. Most have mental health or cognitive disabilities.

The adult imprisonment rate for First Nations people is almost 12 times that of other Australians, higher even than the rate among Black Americans, making them probably the most imprisoned people in the world.

Meanwhile, recidivism rates are increasing. Prisons are not rehabilitating people.

“Nationwide, the recidivism rate is about 55 per cent,” says Cowdery. “That means more than half will be back in corrective services control, either inside a jail or in a community corrections program within two years. It’s a revolving door.”

Key to this problem, he says, is that more people are going to jail for minor offences and are not there long enough to be engaged in any program of rehabilitation.

“Around 40 per cent of prisoners are in for six months or less,” he says. It takes about two to three months to properly classify and house prisoners in the appropriate institution.

“They are simply being warehoused for that period of time,” says Cowdery, “… which deprives them of any opportunity for rehabilitation and reform, which disrupts their family, social, employment, educational lives, and spits them out at the end without adequate support.”

An analysis of historical statistics on incarceration rates in Australia, published in March by Labor MP Andrew Leigh, formerly an economics professor at the Australian National University, titled “The Second Convict Age: Explaining the Return of Mass Imprisonment in Australia”, found there was a higher proportion of people in Australian prisons now than at any other point since the late 1800s.

Yet this appears to have no correlation to actual crime rates – despite what the likes of Deb Frecklington might suggest.

In fact, Leigh noted, rates have been going down for most categories of offence for 25 years or more – long before the recent startling increase in imprisonments.

Says Cowdery, “The Bureau of Crime Research has done a lot of work on the relationship between crime rates and imprisonment rates. And only discovered one cohort of criminals for whom locking up large numbers does a lot of good. That is professional house-breakers.”

Imprisonment rates are not driven by crime rates; they are driven largely by a fear among politicians of appearing “soft on crime”.

The direct consequence of this fear has been “reforms” that encourage the justice system to show less leniency for minor offences and less inclination to employ diversionary processes, says Cowdery.

Various jurisdictions also have made bail and parole conditions more stringent, and increased the number of offences for which imprisonment is available, increased the maximum terms for some offences and constrained judicial discretion when dealing with cases before them.

The tough-on-crime political mindset has also imposed vast costs on Australian taxpayers – some $3.6 billion each year, and rising.

Deirdre O’Neill, associate professor of public policy and public sector reform in the School of Social Sciences at Monash University, says cost varies widely across the states and territories.

“But the cost per day per prisoner in Victoria was $329.”

It is the most expensive prison system in the country, by some distance.

And this is interesting because Victoria also has the highest proportion of inmates in privately run prisons – some 37 per cent.

The privatisation of imprisonment began in that state in the mid-1990s under the premiership of Jeff Kennett.

“Kennett,” O’Neill says, “was really determined to reduce the influence of public sector unions. There was also a view – and this was reflected in other public sector reforms – that if you introduce market-type mechanisms into the delivery of public services, they’d end up being cheaper, better and more accountable.”

But this has not proved to be the case, at least in cost terms. It is harder to assess quality, says O’Neill, for it is not possible to disaggregate outcomes between public and private operators. System-wide there is little evidence to suggest better outcomes when it comes to recidivism rates in Victoria compared with other jurisdictions.

While the current Victorian government appears less keen on privatisation, that state, like the rest of the country, continues to jail ever more people, at ever greater cost. In the 2019 budget, the Andrews government announced it would spend $1.8 billion to house an additional 1600 prisoners.

Elsewhere in the country, private prisons have proved a failure. Following a damning report from the Queensland Crime and Corruption Commission, that state decided last year to take back control of its two privately owned prisons.

The bottom line, says Robert Tickner, who was the driving force behind the establishment of the new Justice Reform Initiative, is that the current model is failing.

As Aboriginal and Torres Strait Islander Affairs minister for the Hawke and Keating governments between 1990 and 1996, Tickner had responsibility for co-ordinating the national response to the landmark Royal Commission into Aboriginal Deaths in Custody.

“I got Commonwealth support for 338 of the 339 recommendations,” he says. “The only one that wasn’t supported was taking ATSIC, the Aboriginal and Torres Strait Islander Commission, outside the public service.”

ATSIC, he says, was key to the implementation of those recommendations. But then Labor lost, and the Howard government abolished the commission entirely.

Since then, Tickner says, there have been scores of reports – “a pile that would reach from the floor to the ceiling” – from various inquiries, royal commissions and other expert studies, all recommending the same thing: policy needs to focus on the real drivers of crime, particularly in First Nations communities, but also among disadvantaged people in general. “On employment, on education, on housing, on health, on early childhood development, family breakdown, poverty,” he says.

“There’s been minimal progress in addressing those underlying issues.”

Tickner is optimistic things might be changing. Even in the United States, he notes, “there has been a very significant shift in the Republican Party in numerous states, like Texas, around criminal justice issues, and a turning away from this obsessive reliance on incarceration.”

A Biden administration has promised to end privatisation of federal prisons.

And in this country, too, Tickner says, there is evidence of an evidence-based shift. He notes that a recent report by the right-wing think tank the Institute of Public Affairs also endorsed a new approach.

Certainly the Justice Reform Initiative has assembled a formidable alliance of influential figures.

Bryce told The Saturday Paper this week she hopes for “a justice system which doesn’t primarily rely on building more and more jails but rather shifts to evidence-based alternatives for many offenders”.

Such a system, she said, would cut recidivism rates, “strengthen communities and deliver better outcomes for victims of crime”.

She lamented the current reality of children in youth detention, “some as young as 10”.

“I hope Australians will get behind this commonsense and practical initiative,” she said.

It appears Deb Frecklington has not heard Bryce’s message.

This article was first published in the print edition of The Saturday Paper on Oct 24, 2020 as "Penal failure".

Lock 'em up' not best way to reduce juvenile offending